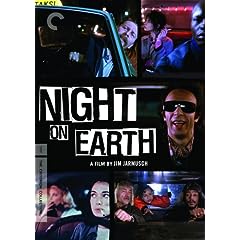 Jim Jarmusch’s 1991 ensemble comedy turns a gimmick into a revelation. The story begins in Los Angeles one evening at 7:07 p.m. A talent agent (Gena Rowlands) gets into the back of a taxi driven by a sullen, chain-smoking young woman (Winona Ryder), and over the course of their bumpy conversation, Rowlands’s character becomes convinced that the cabby would be perfect for a particular part in a movie. Meanwhile, at that very moment, taxi drivers in New York, Paris, Rome, and Hels…
Buy Night on Earth – Criterion Collection at Amazon