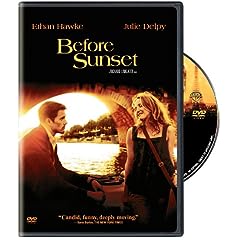 In 1994, director Richard Linklater (Dazed and Confused, Waking Life) made Before Sunrise, a gorgeous poem of a movie about two strangers (played by Ethan Hawke and Julie Delpy) wandering around Vienna, talking, and falling in love. Ten years later, Linklater, Hawke, and Delpy have returned with Before Sunset, which reunites the same characters after Hawke has written a book about that night. Delpy appears at the final book reading of his European tour; they have less than two h…
Buy Before Sunset at Amazon

3 thoughts on “Before Sunset”