A documentary by Hayley Garrigus, You Can’t Kill The Meme explores the bizarre and controversial Pepe The Frog meme that became infamous during the 2016 election. Based loosely on the ancient Egyptian god Kek, the cartoon frog Pepe spread online, especially on 4Chan and many “alt-right” message boards.

If you search for Pepe The Frog, you’ll see that, somewhat absurdly for an innocuous-looking cartoon animal, it’s widely considered a “hate symbol.” With so much political controversy, mixed with mysticism and fairly obscure online subcultures, it’s hard to approach this topic with any kind of objectivity. Hayley Garrigus, however, manages to maintain a detached focus on the many unusual belief systems and eccentric characters she interviews. She herself stays in the background, barely appearing in front of the camera at all.

Garrigus isn’t so much concerned with Pepe The Frog itself, but the underlying ideas and movements that latched on or appropriated the symbol. She was inspired by the book Memetic Magic: Manipulation of the Root Social Matrix and the Fabric of Reality, by R. Kirk Packwood, a now out of print book. Packwood is interviewed and expresses an ambivalent attitude about the movement he unintentionally inspired.

Memes (including the word “meme”) Have a Life of Their Own 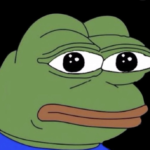 The terms meme magic and memetics go back to the original definition of meme rather than the more limited modern idea of memes as simply images shared on social media. Richard Dawkins coined the term as the cultural equivalent of a virus that spreads quickly through society. Of course, Dawkins is a rather dogmatic atheist and would most likely cringe at some of the ways the term has been used. But this is, somewhat ironically, the very way memes work: they evolve or mutate in unpredictable ways. Pepe The Frog is the perfect example.

If you want to follow the bizarre evolution of Pepe, you may be more interested in another doc called Feels Good Man, about Pepe’s actual creator, cartoonist Matt Furie who disowned his creation after it was appropriated by underground movements.

The ADL has labeled Pepe a hate symbol. Yet, the ADL website says, “In the fall of 2016, the ADL teamed with Pepe creator Matt Furie to form a #SavePepe campaign to reclaim the symbol from those who use it with hateful intentions.” So they are somewhat ambiguously calling it a hate symbol and trying to redeem it. The whole history of Pepe, including its creation and abandonment by Matt Furie, R. Kirk Packwood’s own distancing of his book on memetic magic all show how slippery memes can be and how they take on a life of their own.

Fortunately, Hayley Garrigus doesn’t get bogged down in the controversy of Pepe and the simplistic right vs. left conflict and gets into more esoteric territory. She interviews a self-described lightworker in Las Vegas named Carole Michaella as well as other eccentric magicians, including Billy Brujo, whose getup includes white face paint and a cross on his forehead. All of this seems practically designed to scare away “normies” to dismiss all this as woo-woo or the ravings of political extremists desperate for a way to feel empowered.

When memetic magicians (if that’s the correct term) claim they were responsible, not only for Trump winning the 2016 election but even for causing Hillary Clinton to collapse in the street, skepticism is understandable. However, Garrigus seems open to the ideas that are presented, however farfetched, or at least lets the characters express themselves without judgment (at least that she expresses). She seems more interested in the underlying possibilities of memes than in the particular idiosyncratic way certain characters have interpreted these memes. After all, versions of magic (or magick) have been around a lot longer than American politics.

I think some viewers and reviewers were frustrated by the film’s apparent lack of a clear message. If this topic was handled by, say, a network TV show such as 20/20, the focus might have been on exposing the characters as lunatics or dangerous extremists. On the other hand, I never had the sense that Garrigus blindly believes anything anyone says. Her detached style lets you judge for yourself and, if you’re so inclined, to do further research.

You Can’t Kill The Meme will probably be most appreciated by people who already have some knowledge of alternative belief systems, if not memetic magic itself. It at least helps to have an open mind. Our world is far richer and more complex than is portrayed by conventional institutions and this documentary sheds some light on one loosely defined subculture that is exploring certain aspects of human potential.

You Can’t Kill The Meme is not a movie for everyone, and it received more than its share of negative reviews. Most of these are from “normies,” people with either no background or interest in the occult and fringe movements who are often outright hostile to anything outside the mainstream. In this case, there’s additional pressure to distance oneself from a movement that’s been so closely associated with Trump and the “alt-right” (whatever that really means). However, Garrigus isn’t endorsing any political or cultural movements here but simply exploring a fascinating phenomenon. Memes are always with us and can have a profound, and often hidden, impact on society, whether we like them or not or whether we’re aware of them or not.

You Can’t Kill The Meme is currently streaming on Hulu.