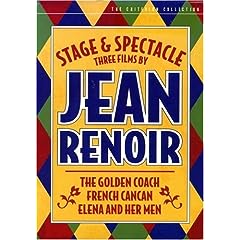 These three Jean Renoir films were not conceived as a trilogy, but they fit beautifully together in this Criterion package: all luscious with theatrical color, wry in tone, and awestruck by beautiful women. When Renoir returned to Europe after his wartime exile in Hollywood, he first turned to The Golden Coach (1953), an international co-production shot in Rome. It contains all of Renoir’s love of the theatrical life, as a traveling troupe of actors arrives in a colonial town i…
Buy Stage and Spectacle – Three Films by Jean Renoir at Amazon

3 thoughts on “Stage and Spectacle – Three Films by Jean Renoir”