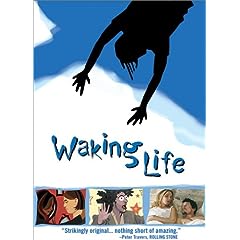 Waking Life is a film that never settles down. Or maybe it never wakes up. Regardless, Richard Linklater’s animated meditation seems to strike a perfect balance between the plotless meanderings of Slacker and the unquenchable knowledge-seeking of Hermann Hesse’s Siddhartha. Any way you look at it, this is a weird, original movie. As he attempts to figure out what separates dreams from reality, the protagonist (Dazed and Confused’s Wiley Wiggins) hears an earful from everyone he …
Buy Waking Life at Amazon