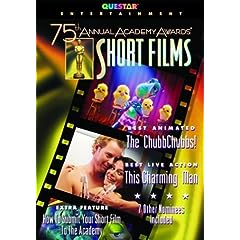 Short films have their own succinct pleasures, but they’re almost impossible to see outside of occasional festival screenings. So it’s delightful that all of the short animated and live-action films nominated for an Academy Award in 2003 have been packaged together for home viewing. The two American animated shorts are, perhaps unsurprisingly, comic–a Pixar snippet featuring characters from Monsters, Inc. and a clever sci-fi shaggy-dog story (“The ChubbChubbs!,” that year’s …
Buy 75th Annual Academy Awards Short Films at Amazon